I was in my brothers room (Elijah's) and I was in there for a good reason. His room was 1 inch bigger than mine, so not a very good reason. Anyways, my dad was talking to him about his computer or something and all of a sudden... Elijah said there were chickens outside his window! I was so angry, that I walked at about 1 mph to my room, opened my window and just screamed at the chicken. CHICKEN! I screamed. It wasn't very stunning to the chickens, as I scared them by opening my window in the first place, but I did it anyway. So, as if that wasn't enough (which it wasn't), I paced out of my room, walked out the front door, and chased those cluckin' chickens around the house while randomly yelling threats that I would cook them. Then, I picked up fluffy, my emo chicken, and told her she was emo, then chased the other chickens down the hill to their pen, while holding her and threatening them that I would let fluffy peck them each in the eyes. They got the idea, so I didn't have to carry out any of my threats. 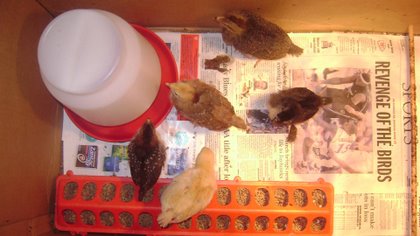